9 Benefits to Using Compost for Erosion and Sediment Control

You are here: / Denbow Blog / 9 Benefits to Using Compost for Erosion and Sediment Control
What is Structural Soil and Why is it Good for Trees 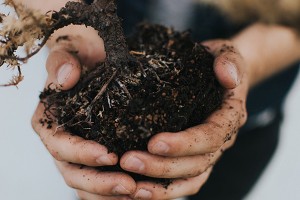 As you are now likely specifying for projects for this coming fall season, we found this article about using compost for erosion and sediment control to be very helpful.  Ron Alexander writes for Forester Daily the following article:

9 Benefits to Using Compost for Erosion and Sediment Control

"Erosion and sediment control. Although still considered relatively unknown in certain regions of North America, the use of compost in erosion and sediment control has been a very successful landscaping practice for over 25 years. Compost blankets (the application of a layer of compost on hill slopes), compost berms, and compost filter socks are incredibly effective, enhance the long-term quality of the soil, and, in the case of compost blankets, have excellent stormwater reduction advantages.  These innovative techniques have been thoroughly proven through university research, and have been recommended for use by the USEPA. National specifications exist for these applications through the American Association of State Highway and Transportation Officials. (Go to www.alexassoc.net, then “Library of Articles,” and look under “Compost Specifications” to see the full specs.)

When used as a compost blanket, compost is typically placed on up to 2:1—and sometimes more severe—slopes at an application rate of 1–2 inches in depth. This technique is used and is highly effective in reducing and slowing the sheet flow of water. Lesser application rates are possible in areas of lower rainfall accumulation and intensity, on less severe slopes, and where vegetation is to be established.

Once applied, the woody fraction of the compost increases surface roughness and slows the flow of runoff, thereby making it less erosive, more likely to induce infiltration into the soil and reduce the transport of pollutants.

In addition, the woody fraction absorbs the energy of the rainfall, preventing soil particles from dislodging (the first stage of soil erosion), while the finer fraction beneath it absorbs a substantial volume of moisture, and is optimum for plant establishment and growth. Research completed at University of ­Georgia illustrated that a 2-inch application of compost onto a slope could absorb and hold 1–2 inches of rainfall.

Further, the unique properties of the product allow for extensive rooting of the grass and other vegetation, locking the blanket to the slope and protecting the soil beneath it. It should also be noted that compost blankets are effective with or without vegetation, but application rates of compost can often be reduced if it is applied with vegetation. University research consistently illustrates that compost blankets not only constantly outperform hydroseeding and conventional erosion control blankets (e.g., rolled fabric) in vegetation establishment, but also more effectively reduce stormwater runoff volume and peak flows, as well as total sediment and nutrient loads (Faucette et al. 2005; Faucette et al. 2007; and Faucette et al. 2009, “Large-scale performance and design…”).

Research performed for Portland Metro, an environmental regulatory body based in Portland, OR, and the USDA ARS further illustrated that yard trimmings compost was capable of not only controlling erosion, but also of filtering, binding, and degrading contaminants from the stormwater passing through the layer (Faucette et al. 2013; Faucette et al. 2009, “Storm water pollutant removal performance…”).

The benefit of using a compost blanket lies in its ability to:

Compost berms and filter socks are “3D” filters possessing huge sediment and biofiltration capabilities. Where the berms are used in sheet flow conditions, the filter socks (think pantyhose filled with coarse compost) can also be used in concentrated water flow situations. This is because filter socks can be staked into place, and the compost media is contained within a mesh netting material. Although both compost berms and filter socks are used as perimeter control devices for sediment, installed around the borders of construction sites and at the top and bottom of slopes, the filter sock technology is much more versatile (see www.filtrexx.com). They can even be used around stormwater inlets and to build “living” walls. One of the most important research findings pertaining to compost filter berms and socks, is that they are much more effective in capturing fine particles of sediment, which are not captured as efficiently by other more conventional sediment control devices (e.g., silt fences). This is very important in that fine particles of sediment have the potential to be much more damaging to the environm

ent, since they transport further and stay in suspension longer, and also contain a greater amount of chemical contamination (e.g., petroleum hydrocarbons, heavy metals, nutrients) than larger particles of sediment.

The use of compost in erosion and sediment control projects has expanded significantly since the adoption of the National Pollutant Discharge Elimination System (NPDES) Phase II regulation for construction activities. This regulation requires that construction sites of 1 acre or greater to have erosion and sediment control plans in effect on a daily basis using prescribed best management practices (BMPs).