You are here: / Denbow Blog / Reasons why green infrastructure matters
How to Replace & Avoid Compacted Soil Under Urban Trees 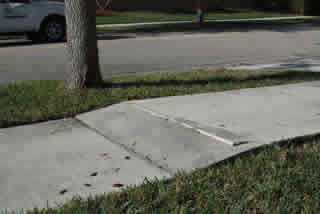 Some benefits of green infrastructure include temperature modification and reduced stormwater runoff.

Sourced from Lawn and Landscape, article by Shawn Fitzgerald and A.D. Ali

Urban areas contain substantial expanses of hardscape in the form of buildings, paved roads, parking lots and concrete sidewalks. The impervious nature of these surfaces leads to runoff during periods of heavy precipitation.

Up to 55 percent of precipitation in urban areas may be in the form of stormwater runoff. In addition, compacted soils with poor drainage will also contribute to runoff. Environmental drawbacks of stormwater runoff include erosion of slopes and other surfaces, overloading municipal wastewater treatment systems and introduction of pollutants (chemicals, oils, fertilizers) into natural bodies of water. Common pollutants and their sources include copper from brake pads, roofing materials and pesticides; lead and zinc from roofing materials; and phosphorus and nitrogen from fertilizers (see ref 1 below).

High levels of fertilizers in the water, especially phosphorus, may lead to Eutrophication, which is the buildup of nutrients in natural bodies of water. The consequences of Eutrophication include algal blooms which are fed upon by microorganisms. When those microorganisms die, the oxygen in the water is depleted thus adversely affecting fish and other aquatic wildlife.

To simulate this in urban settings, green infrastructure is increasingly becoming a popular alternative to traditional ‘gray’ infrastructure.

Benefits of GI include temperature modification in urban areas, enhancing street and sidewalk aesthetics and reducing and filtering stormwater runoff. There are several types of green infrastructure that may be utilized in urban settings. Those include urban forests, green roofs, rain gardens and bioswales (see ref. 1).

These are the green belts composed of trees and other woody vegetation including both municipal park and street trees as well as those found in residential landscapes. It is valuable to plant trees as a long-term investment when new neighborhoods are being developed. The ability of urban forest canopies to reduce stormwater runoff, cool the ambient air and increase property values has been documented in many cities. 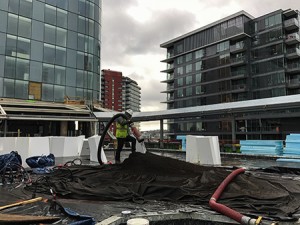 Also known as rooftop gardens, green roofs are useful in reducing the Heat Island effect. In urban areas, hardscapes reflect the heat from the sun and increase ambient temperatures compared to more densely vegetated areas. A green roof can be constructed by planting vegetation such as groundcover, turfgrass, shrubs or small trees (like what’s pictured at the top). They may also contain vegetables in communal gardens which can be enjoyed by residents of the building. Plants selected should be low-maintenance with the ability to tolerate dry periods as well as temperature fluctuations. In addition to enhancing aesthetics and modifying stormwater runoff, they can reduce the Heat Island effect by reducing roof temperatures through evapotranspiration. On a sunny day, a green roof will be cooler than the ambient air compared to a traditional roof where the temperature may be 90 degrees higher than the surrounding air, the EPA reported (see ref. 3).

Green roof construction is completed by installing various layers on top of the existing roof. The topmost layer is the plant layer growing in a medium with low bulk density to reduce weight loads, and porous to allow for water infiltration. Underneath is a filtration sheet to allow for water percolation and retain growing media in the top layer. Beneath that is a drainage layer that leads the water to a storage and roof protection layer. According to the General Services Administration, the lowermost layer is a waterproofing membrane to protect the existing roof structure (see ref. 4). 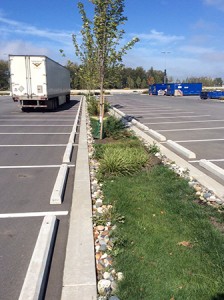 These offer an efficient, pleasing way to create a miniature wetland in a residential area. According to the EPA, a rain garden is a depressed area in the landscape that collects rain water from a roof, driveway or street and allows it to soak into the ground (see ref. 5). For information on native plants to use in your specific area, the EPA offers more details online here. The same concept applies to larger areas such as retention ponds, seen along interstate highways in some states, which capture rainwater and allow for slow infiltration.

These are “stormwater runoff conveyance systems that provide an alternative to storm sewers,” the Natural Resources Conservation Service reported (see ref. 6). The concept is similar to that of rain gardens, but they differ in their larger scale. The soil should be porous to allow for an infiltration rate of at least ½ inch per hour. If drainage is slow, then an underdrain pipe may be installed to facilitate flow. Amendments such as sand, compost, topsoil, perlite or vemiculite may be added to improve existing soils. Preferred vegetation includes large grasses or deep-rooted woody plants to allow for filtration of contaminants and to permit water infiltration.

Bioswales may be constructed along roads and medians as well as parking lot islands. They are not practical in flat areas or in areas with slopes less than 5 percent. Bioswales can be constructed from natural contours by modifying the slopes to no steeper than 3:1. Each swale should be constructed to serve an area no larger than 10 acres. The total surface area of the bioswale should be 1 percent of the total area from which it will receive stormwater, according to industry research (see ref. 7). After installing a bioswale, it is imperative that good maintenance practices are followed to maintain the effectiveness. Allowing weeds, exotic plants and trash to accumulate will reduce the benefit and aesthetics.

So, why does green infrastructure matter? There are two main reasons this matters to landscape contractors. First, by implementing green infrastructure practices and methods, you can contribute to environmental protection efforts, which are beneficial in both short- and long-term situations. Second, offering creative, alternative habitats and solutions to your customers provides your business with a competitive edge to grow and prosper. So, take green infrastructure and get creative with it.